Willow 2 is top of the Table

OK it might have been my thumbs all along, the Willow 2 in Clayton’s hands had a storming day on the Mynd this weekend.  I don’t want to get distracted by round Zeros meaning the result won’t count to the league- Well Done Clayton.
It’s great to see the philosophy that you don’t need to spend over £1,000 on an air frame to win working still.
I’ll  just have to keep blaming the kids for my poor form!

What a 3 days!  The Welsh open has a habit of leaving you feeling weathered and  exhausted but with 3 days of flying, alternating from the Crest to Mickies and back to the Crest on the final day, there were broad smiles on the faces of all Pilots.
First of all the organising team, I can’t praise these guys well enough.  Day 1 had us all skipping merrily over to the Crest well before the start time and we found Knewt and Mark Treble fumbling on the start line.  I have to admit t being puzzled at first but the new timing gear they were setting up more than proved itself.  Automated working time, count down, lap counter and round time- also combined with the times being show on the safety line- you can’t get much better can you?
The low key highly effective approach went through the full weekend, even the Buzzing was organised without the use of cattle prods.
The conditions over a total of 13 racing rounds were always ‘good’ and often challenging but the wind stayed between 8 and 14ms al weekend and so the race did not become a contest of these with the most Tungsten.
Day 1 saw Joel West show just how to fly a reversals course.  With the rest of the cream was steadily rising to the top myself and fellow willow flyer Clayton were finding out how important practising on course is.  I’m convinced that I was spending as much time off course than on it in the first rounds.
Day 2 saw us move to the far side of Mickies, only a sharp shower stopped us from starting on time and the course was set up for an immediate start.  Perhaps it was the bleary eyes starting to emerge but day 2 saw the first models damaged that I can remember.
I had been delighted with the performance of the Willow 2 on day 1 and into day 2, only my thumbs and a set up that was feeling too soft to race (Devon set up) were holding the model back.  Then 4 rounds in I saw Frank and Martin fly in front of me and a thermal showed itself for them.  I launched climbed beautifully, came on course a little early to make use of the air and off she went.  16 seconds and 6 of my most enjoyable legs of F3F I can remember.  The Willow screamed, I pulled her round as fast as I could and she shot around the course.  Unfortunately the thermal passed too quickly and I slowed down before my PB was safe.
With the usual grumbles of Thermal lotteries from different pilots, the skill of Martin, Simon and the Dark lord Dakin were a master class and whatever the lift they made the most of it.
Day 3 and it was a less than merry skip along the Crest to Mid Wales.  The Welsh open Marathon was proving tough, our number was dropping off and mistakes coming in.  My own was to simply hit the hill as I tried to run along the edge.  A cartwheel and wing recovery later and the only damage was the servo tray coming loose- tough toys these Willows!  The number of pilot mistakes seemed to step up again but the reaction to this by the Dark Lord was to fly the hardest and best flight of the day in his last round- stunning!
The weekend is a great chance to see other models and modellers.  My feeling this year in the UK is that the new models have mainly come from different ways to bolt various Baudis parts together.  I love the look of the Radical Jazz flown by Daniel.  I didn't realise just how many top 10 places Clayton achieved with his Willow 2- really confirms to me that it's my thumbs and not the model holding me back!
Seeing a Spline in the flesh was a treat.  The different set up and ballasting philosophies from non UK from the continental pilots was good to see.  Less ballast and flown with more ‘ping’ to the turn was reminiscent of the Sting guys coming over.   It also showed that choosing a method and flying it well is probably more important than the method.
So after 3 days the winners were very worthy and a great competition was well run in fantastic conditions which sort out the best pilots.
1 Simon Thornton 10949.04
2 Joel West 10873.91
3 Peter Gunning 10780.76
4 Martin Newnham 10606.39

I've not had the chance to post anything about this year's welsh open, that's probably because each day has seen us flying until after 6. Day 1 w the crest and yesterday on mickies.

There's been some top draw flying from some really good guys. More on the technical stuff later but the biggest news is that Scott Ravenscroft (ex Leek sloper) has managed to stay fit for 2 days- smashing his PB.

English open and some Welsh Practise

The End of August and I took the plunge to enter the Whitesheet Thermal lottery (sorry English Open).  I took 2 Willow 2 models along for the weekend and it was great to see 3 other pilots with various Willow versions.  It was interesting to see the Willow 2 with a Willow 1 tail that Joe Cubitt has been enjoying so much- it certainly looked to have a good turning control in the light air.

John Bennett flying his Willow 1 looked his classy self all the way through the race.

The delay in the start of the race gave time for the almost no wind conditions to be well established  and start to swing off course whilst the factor 30 to be liberally applied.  With ballast completely removed the Willow 2 behaved impeccably and was placed around the top 5 in the first 2 rounds.  Flying in conditions which demand reliability and performance seem to be right up the Willow’s street.

A rush of blood and optimism that our change of slope and slight increase in summer breeze had me gambling on ballast and loosing.

Perhaps it is the low nature of the Whitesheet slopes that seems to emphasize the variances in lift more than other sites.   Whilst I do not see the English open  Ever rivalling the Welsh Open in terms of speed or prestige it’s a great place to fly with some excellent company.

After a fun evening meal and an interesting night under canvas and massive rain it was time to convene for day 2.  A dash of common sense and we were drinking coffee in a local pub garden.  Although the bad weather meant that there was no racing on the Sunday, the 4 hours it took to read out the previous day’s scores mean that the rain had stopped in Devon on the way home. 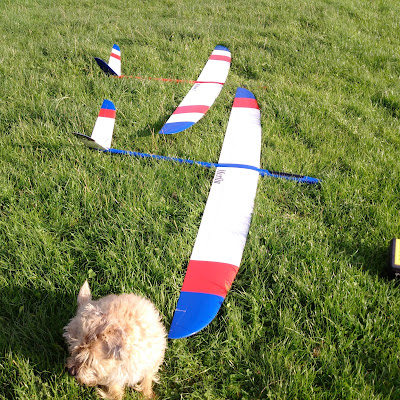 I had the chance to fly some more and test out my latest Merlin.  It’s very tempting to pack a Merlin and a Willow for the Welsh open- next to the BaroccaJ