New Molds after a day in the sun

This weekend provided a great chance for some light wind sloping and thermalling at the Whitesheet club day.  The day reminded me of just how varied a sport we enjoy.  I didn't get any worthwhile pictures of the array of models on the slope but don't some pilots have a lot of toys!

I had to force myself to swap between my newly maidened Falcon and my Harrier- 2 models for me in 1 day is about as varied as it gets.  With models like these you do have to be aware of the amount of sky you cover when compared to a R/E thermal ship or middle phase.  I did limit and change my flying away from the edge- but that's not a bad thing.

I came home to a couple of pictures of the new molds for the 3m 'Saker' model we have been working on.  Its good to start to see a 3d version of the new design and see how some of the design innovations look in the flesh.  Having the fuselage molds made as positives really helps with this.  It's not the reason we do it this way for the fuselage.  For complex shapes like fuselages I like to have a softer positive that the production negative molds can be pulled before being tucked away for safe keeping.

The Tail molds follow my preference for a negative being made from aluminium.   Choices like this do seem quite small but they are very hard to change once the CAD files are made. 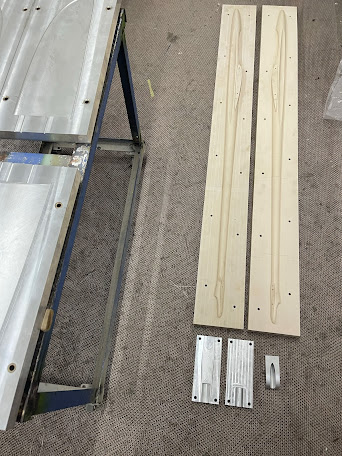 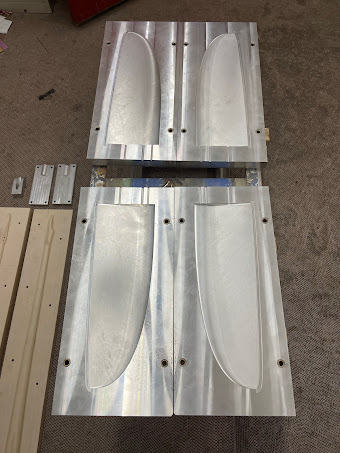 A year on- going strong

The chance for a full day's flying, whatever the slope, should always be grabbed.  The chance of a sunny day on Mickies- with the expected thermals was too good to miss.  2 falcon's fitted very nicely in my little car- I think I'd have taken the 2 whatever the car.  A year since that first flight on a ballistic Crest the Falcon has been more fun too fly that just about any other model I have owned. 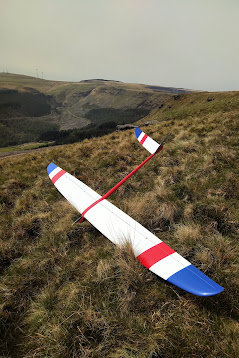 Until the breeze filled in the conditions were very thermic and once or twice I was looking to check the bail out options but every time a thermal was found in time and height could be exchanged for speed.  This is where the Falcon really excels, it accelerates so quickly.
I have found that the falcon feels happier with 300g of ballast as a start point even in the lightest of conditions.  Thermal performance is not affected with the weight.  A couple of red Kites came too join in the fun.
As the breeze filled in I was flying with 600g of ballast and a huge smile.  Turn styles are always an interesting choice in thermal conditions, I don't think there is any great advantage f 1 over the other as the air is not really being shaped by the hill's edge in the same way as true slope soaring.  Do the one you like well and that will be just fine!
In the last year I've flown the same model's in just about every condition that I'd want to be out in.  These pre production  model's have never put a foot wrong- although I may have.

A change of wing

Another weekend failing to get out to fly but my new 3m wing has arrived with the modifications for testing.  It's one of the real fun parts of producing models when you have a manufacturer who is as keen to get things right.

A few pilots have asked me about the wing servos in my Falcons and as the 3m is pretty much the same, I took a quick picture of the aileron servo between wings.  The King Max servos have proved to be bullet proof so far.

One thing I've been playing with is some epoxy and carbon around the 2mm threaded push rods.  Once adjusted to size I find this gets rid of any flex and slop in the fixings.  The result gives me slop free controls. 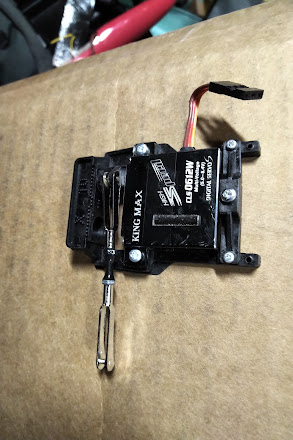 Back to basics with the kids

The plan was a sunny day's flying with the kid's foamie and the occasional thermal and thrash with my Falcon to avoid the painting at home.

With the wind far stronger than forecast and expected the morning soon became a backwards flying session as the little foamie got more and more battered. But it was so much fun!  A day that really reminded me of the reasons we started this mad sport in the first place. 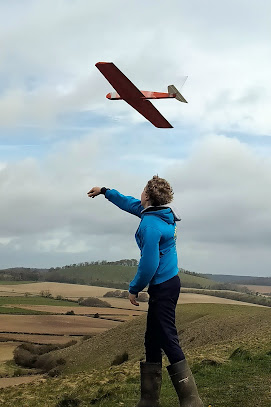 The Falcon made me look far better than I am to impress the kids.  Having 1 model that I've ballast up on the Crest, thermalled on a club day and then carved around on the next day out makes life so easy. 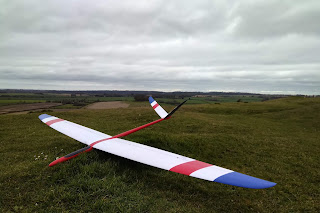 If you like a model, you'll fly it more and fly it better with a smile on you face.

Carving up the Crest

What a day for flying on the Crest! with a good steady 25-30mph wind and the sunshine generating thermals which cycled through to keep things interesting- days don't get much better.  Meeting up with a couple of good mates also gave me the chance to bench mark my Harrier and much flown Falcon against Andy's Freestyler 6 and the Pike of Les Wood.  These 2 lads can really get their model's going, after a late night I wasn't sure that I could do the same but Welsh open training includes all aspects of the weekend.

My Harrier was the first to go, I kept the all up weight to 3.5kg, more from seeing the carnage on the slope the week before on landing than worry about the model in the air.  I needn't have worried as I got the Harrier down safely each time- the last 6ft was quite rapid at times.  In the air, if I didn't mess things up, consistent mid 30 runs were the norm. 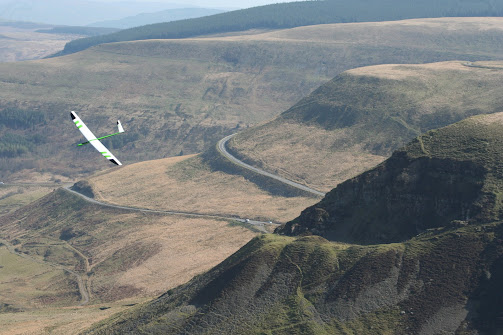 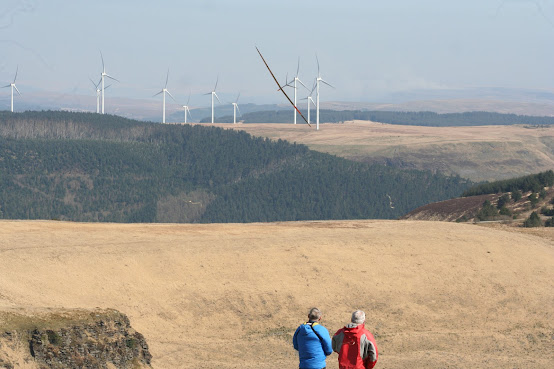 A racing duo in perfect harmony. 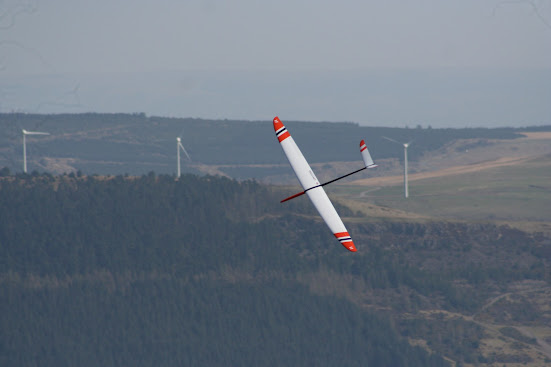 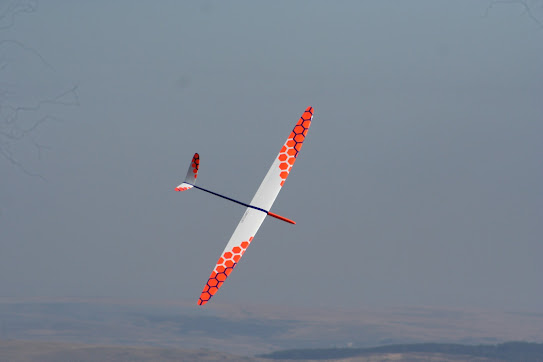 Possibly the first time I've seen a Pike going this fast and set up this well in the UK.

Although no damage was sustained in the air my Harrier managed to crack a servo horn after a gust picked up some kit and dropped it on the wing.  This motivated me to get the Falcon rigged and flying, as always I just wondered why I wasn't flying the Falcon all day.  Again mid 30 second runs were repeated over and over again.  Some fun video to show just how inconsistent my thumbs were.
But what a fantastic day's flying.

Willingly standing in a Welsh northerly in March may well be the first sign of madness but the moment I stepped out of the car into that bitter wind I was snapped round.

The 3m test wing was the first to go, just half ballast hurled off the VR98 slope. At half ballast she was probably heavier than many of the models I have watched so many times on the VR98 film.   Reversals and the tighter turns of VR98 didn't feel as fast as up turns and sweeping carving turns.

Even with increasing amounts of ballast the wing was rock solid.  Carving around the sky at these speeds takes gentle thumbs so as not to kill the speed.  But it does feel easy.  I'd like to claim I was practising different turns but there was a lot of just having fun flying very fast in big air.

Time to really wake up and the Falcon 100 model- this model wakes you up better than any expresso!  I just love the Falcons- without a course its hard to know just how the 2 models compare in terms of speed.  But the Falcon is definitely quicker and so much fun, fast and quick can be different things.  For pure soaring pleasure I don't think I have ever flown a better model.

A great morning's flying and really got the juices going! 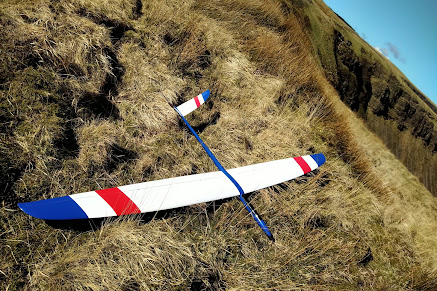 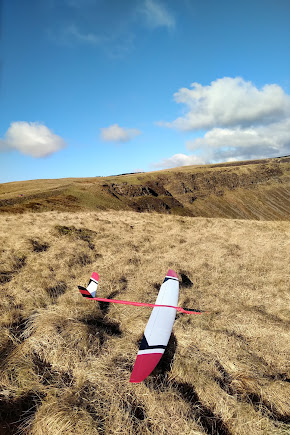 Test flights are always nervy, I had the new model out today in some cold blustery conditions. With the calculated CG always pencilled in rather than set in stone I haven't fitted the ballast tube yet.
Although I told myself that this would mean that any less than perfect landings would be easier I know that normally I would have used 500-800g in the conditions.
The launch was verging on dull, she sailed away with barely a click of trim. I used the set up from my harrier models as a start point, there's lots of fine tuning to do but I never felt like being bitten.
3m f3f style models are just easy and joyous to fly. Feedback on conditions was obvious and as the air squared up I was able to carve some EM turns as well as the usual suspects. And yes, the speed carries very nicely.

Home to warm up and fit a ballast tube! 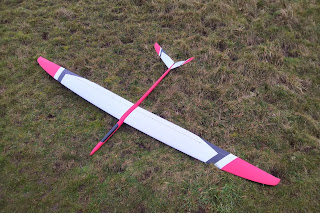