The chance of a 2 day pass to fly and meet up with modelling royalty (Slopetrash himself) is not to be turned down.  Starting at Portland, 3 hours were spent With ‘BobbyR’ in some very light winds and blistering sunshine, initially convincing him that hurling a big mouldie off a cliff in <5mph winds was a good idea and then enjoying that feeling that- yep it was flying (just).  Our time was only broken by Bobby’s missus wondering why his 5 mins had now taken nearly 3 hours- it was one of those days.
With the sunshine still beating down I fancied some inland soaring to set the Artist up some more.  I’ve moved the CG back to 107mm now (JK’s recommendation in the first place) and true to form she’s a little more crisp, goes where you point her and with just a smidge of diff if performing some stunning racing turns without any sign of being up-set or biting back.  One thing I love about the Artist is the way that she responds to camber- centre on a thermal in this mode and she really is away, but unlike some models she does not stooge around sinking steadily with camber when you’re not in a thermal.
It was soon time to meet the family Slopetrash for the night before Maiden Castle was chosen for the next day’s flying.  The site is an interesting one, with 3 layers of earth mouth fortifications, each one topped by a narrow path.  We opted for the middle layer and much to Andy’s joy set off on the slog up the hill as the clouds began to break.
Hills like this are always fun, with a steady flow of thermals adding to the slope lift, it didn’t take too long for Andy to regret sharing a radio!  After joining Daniel in the air for a while it was time to broach the landing- crow along the path and land on the top- or in my case bounce a bit to demonstrate the Willow’s strength as well as thermalling ability.
As the winds died we opted for the land the planes at the bottom option, with Daniel switching off and our bags much lighter on the way down.  With all my toys flown it’s back to reality with that smile you get from a great trip. 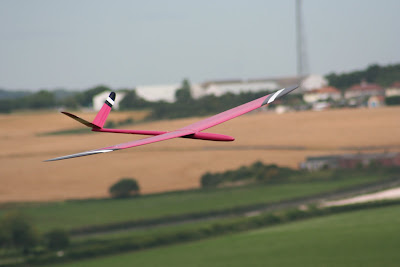 After confirming now that a taking your child to a slope doesn't invalidate your insurance a family holiday seemed the perfect time to maiden the new Artist 3 and get some brownie points. 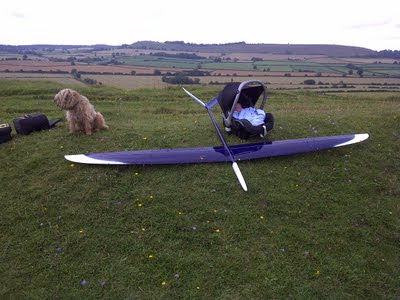 So in light thermic air and my new multiplex tx my 2.4gig cherry was gone and the artist 3 was away.

Yes, You can easily spec her out and eat up a vertical dive the pull full up- she bounces off the turns

And yes women do seem to have made child care out to be tougher than it seems!
Posted by ian at Wednesday, July 20, 2011 No comments:

Turn your back for a week to have your nationals and just see....

Should I be saying this on the Willow blog?

Whilst I was showing the slower side of the Willow this weekend it looks as if those pesky chaps were putting the Pike precission through it's paces in Slovakia.

It would be cruel to suggest that UK races could have been planed before February to give UK pilots a chance to race at the Donovaly race this year and see the Pike P.

Not much room to get your elbows in this one!