Pictures and fun from the Welsh Open

F3F in the UK is by far and away the most popular/well attended and I would suggest accessible soaring class in the UK today.  The Welsh Open has a long tradition of being one of the center pieces of the British and a highlight of the European soaring calendar.  This is a very weather dependent sport and weekends like the one we have just had will continue to happen.  I’m sure that if the wind had played a little more on Friday then 6 rounds or more could have been achieved on this day alone. 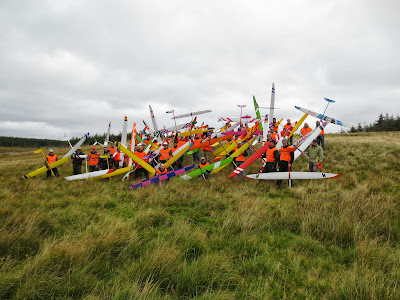 A look around the pitts of the Welsh Open is as close to an F3F expo that we have in the UK.  Other than the lovely Merlin and Willows on show some of the new crop really caught the eye.  The Crossover has to be one of the nicest looking models available today- 2.7m and a swept back LE just seems to work for UK slopes in particular (does for the willow and Merlin anywayJ) 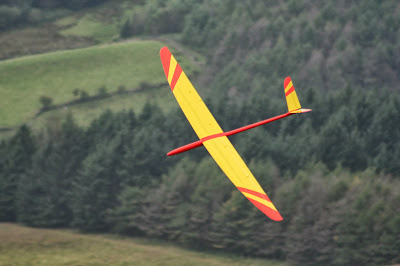 It may just have been because of sitting next to Martin’s rash of Freestylers but they are clearly still a dominant model. 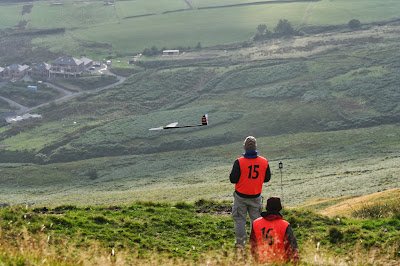 The other dominant model looks to be the knitting circle (?) of needles that were racing.  From the 100 to the new 115 (2.7m again you see) but predominantly the 124 needle was in the in hands of a number of the British pilots. 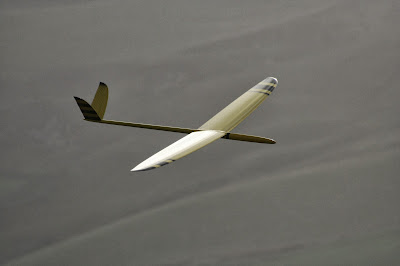 3 very variable rounds simply isn’t enough to give anything more than an aesthetic.  Stingers certainly look to have that end sewn up 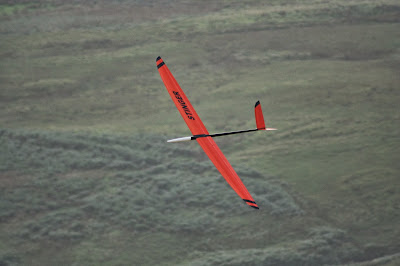 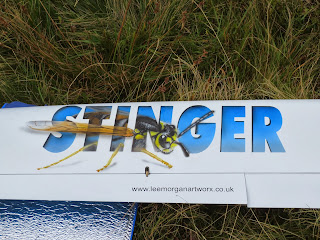 But for some old fashioned style: 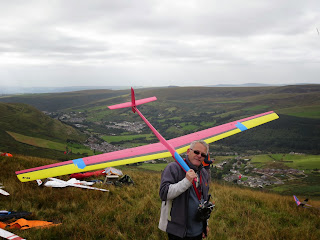 We're still working on happy faces in the fog: 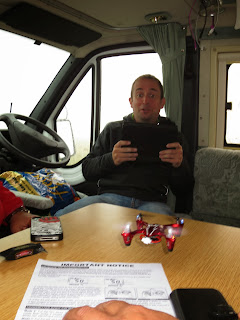 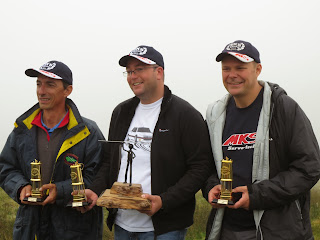 The Welsh clag gave us plenty of time to catch up about winter leagues.  If my memory serves me the plan is:

More details will be posted on the GBSRA.co.uk web site along with details of the Champion of Champions race- I understand that they will be taking the race on and that the trophy we have will be used each year.  It's fantastic that this race will continue, good luck to those organising it.

If you've ever thought about having a go at F3F/watching some blokes getting cold on a hill side whether you think your model is suitable (It probably will be) then the winter leagues are the ideal first introduction- get out and have a go!
Posted by ian at Monday, September 23, 2013 No comments:

After 3 days on Mickies only rewarded us with 3 rounds of racing that's the Welsh Open completed. Huge congratulations to Pete gunning on his own win. Also to frank on a very smoothly flown 16th with his Willow- really showing off the Willows best characteristics of simply carving the course smoothly and quickly.

I have to put my hand up and say my merlin wasn't set up properly for racing but I just didn't fly her well enough. Still when the air came through for me in round 3 she was off like a scalded cat.  It's clear that the Merlin has the speed and it's jjust a case of practise and set up from my thumbs to allow the turns to let the Merlin show what it can do.  After flying the Willow almost exclusively for nearly 3 years it's a fun challenge to play with the Merlin.

A good weekend and thanks to Kevin AJ and Martin for trying just about everything to get the race on.  Round 3 stretching out until 7pm on Friday was a nice ballance to my number 1 starting possition.

Pictures to come later.
Posted by ian at Sunday, September 22, 2013 No comments:

Right, water-proofs/sportbrella are packed and aerial screwed into to radio I'm ready for a good weekend in Wales- Oh and a model or 2!

There's no point in looking at the weather forecast in Wales more than 2 pilots in advance so it's time to have some fun and meet up with my Willow team mates.  I'll post up some picks each evening to show how my blind optimism is lost to the reality of my thumb's lack of ability.

A test at Aggies

An afternoon off and it was a chance to test fly the production Merlin on Aggies- as well as see the all round good bloke Roger with his Caldera.  It was a chance to show off the Merlin to other model pilots as well as to have a play before next week’s welsh open. 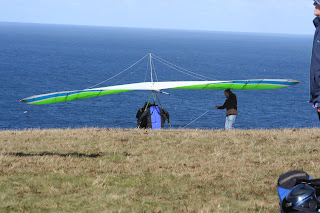 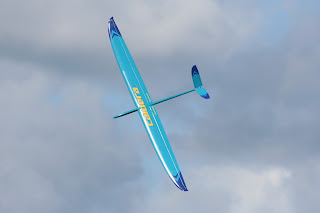 Aggies is a well used slope by Paragliders and hand gliders.  When I got there today you just couldn’t move for hang gliders but there was a remarkable amount of co-operation and as hang glider pilots seem to spend even more time talking about flying than we do, my chance to launch soon came. 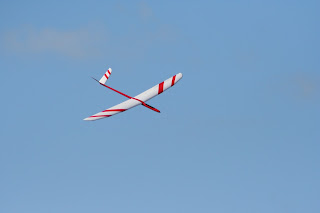 One model worht a mention was a rather lovely looking Blanik. 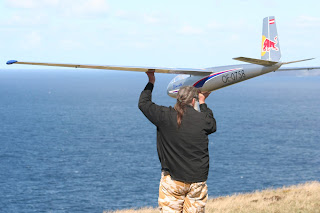 Wow she went well! Thanks to roger for these pics! 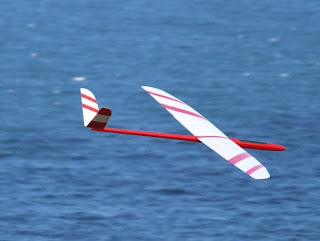 only a Merlin maiden can make you this happy! 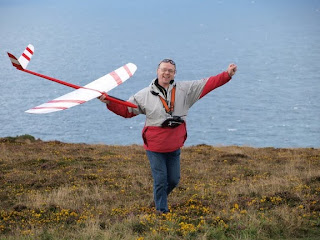 The Merlin is my current new toy and I still feel like a kid at Christmas flying, driving home still punching the air after a days flying is cool!  It was great to see Roger again.  I might not have raced in 7 months but I can’t wait to see what the Merlin will do against the clock.
Posted by ian at Saturday, September 14, 2013 No comments:

British Slope racing has gained ‘specialist body’ status within the BMFA!  First of all a Huge thanks has to go to Martin Newnham and others for making this happen.  Slope racing has more of it’s fair share of people sitting on the coat tails of individuals like Martin, despite his strange Cockney ways the amount of effort that Martin has put into driving UK Slope racing forwards has to bee applauded.
Cutting through the formalities of the BMFA/SFTC and other acronym laden committees what this means for the average racing in the UK (as I understand it) is that although you don’t have to be a member og GBSRA to race if you do choose to become a member you can have a direct say in what happens in the sport.
I will be signing up as a member of the GBSRA.   If you’re interested in GB slope racing being run by slope racers then check out GBSRA.com
Posted by ian at Thursday, September 12, 2013 No comments:

I received my production Merlin yesterday.  That’s 2 Willow Racing models that are being produced for our distributors and should be on a slope near you soon.  I can’t believe I’m building another model just before the Welsh Open again!
Now I know you’re expecting me to say it’s stunning, going together really well and how pleased with it I am- you’re right!  Extra carbon in the fuselage boom a longer wing joiner (for both the Willow and Merlin now) and what I think is a really nice F3F lay up wing with Carbon only where you need it that’s improved the weight distribution in the wings.
All these changes- as well as some other minor changes are really hard to take pictures of and show you.  Both the Willow and the Merlin are a result of many small improvements and developments adding up and I believe really delivering 2 excellent models.
Producing 2 models is not a static process but I’m really proud with the results and What Willow Racing has achieved with our Chinese partner over the last 3 years.
Posted by ian at Thursday, September 05, 2013 No comments: