A chance to fondle Martin's Merlin

Martin tells me that he's going to the BARCS AGM on Sunday to help explain F3F, as well as other things.  He'll be taking his Merlin along as an example of an F3F model, this could be one of the few times that Martin will respond possitively to being asked for a fondle!
Posted by ian at Thursday, November 28, 2013 No comments:

Finally got to my pictures

With a small field there's not much time for pictures but there's a story of the day. 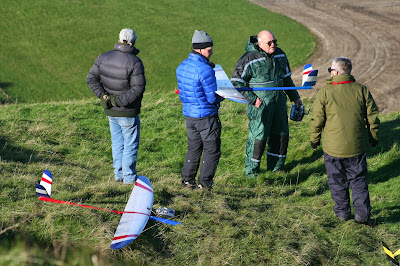 The Souther Winter league is a wash with Willow racing models.  Over half the field had Willows or Merlins 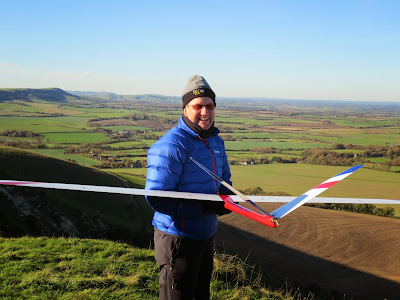 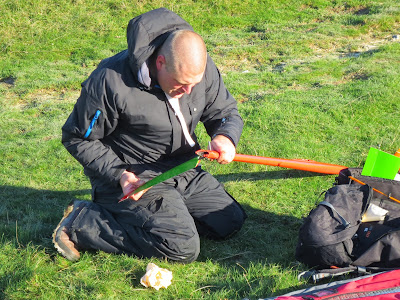 Alan tells me he cartwheeled his Artist 3 in order to investigate the build quality of Japanese models- a pitty its made in Korea. 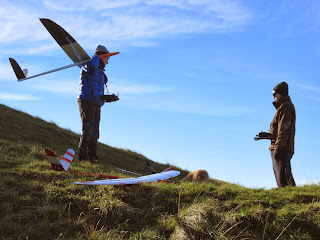 It was an excellent days racing!

The Start of the Southern Winter league has given me a great excuse to try and attend a few races and test the new Merlin against some other models.  It is also a good excuse to visit John Philips and attempt to sabotage his race with red wine the night before.
With the Northerly wind biting it was amazing to see so many Willows being flown in the field, one being flown far too well by new boy Matthew Howe.  The look of a Willow racing always makes me think of a dart being steered around the course- A fast dart!
While Simon (we’re all pleased to see him) Thornton demonstrated Dynamic turns for round after round and won round after round.  There must be something about flying over a naked long man that affects a pilot.  For what appeared to be a relatively easy landing area there were a strange number of bumps bounces and crashes that claimed a good few models.
My own race suffered from round 1 as the Merlin’s tighter turning (got my excuse ready) had me cutting base B and just as I was telling myself that I have used up my discard I did the same trick in round 3.
I probably learned more about the Merlin’s set up in the 8 rounds of Sunday that in the preceding 6 week’s flying.  She kept on delivering times that were 3-4 seconds faster than I felt I was flying and when the air did come on, even my thumbs had her really pinging off the turns.  For the last 5 rounds the Merlin got me consistently higher and higher up the field.  Those broad wings had her grooving on the course very smoothly- messed up only by me.
I’m looking forward to Whitesheet but the chances of practise in the mean time all depend on my DIY and pot washing skills.
Posted by ian at Monday, November 11, 2013 No comments:

I just can't bend these wings

With another storm coming over this weekend it was definitely time to take the merlin out and see how she copes. Flying fast in a smooth thermal is one thing- and I know the merlin can do that. But self launching in bumpy strong winds, fully ballasted and then managing your energy as you rip up the Sky is another.

You have to love moldies, the last time out the merlin was thermalling but add 3lds of lead and the same model is handling the rough stuff.

Being able to carve a turn is a great help in rough air and the merlin did this as well as it was pinging off the corners earlier in the year.