I've been sent details of Guillaume's excellent blog.  He's taken a Harrier and electrified it.  This is something that I have very little knowledge about and so I wouldn't want to make any recommendations of my own.

It's great to see someone taking the Harrier and having fun with it, this is the whole point of this flying game!

Falcons in the sunshine

After a great weekend at the nationals, the light winds and sunshine tempted me out to whitesheet with the Falcons. I had my blue fuselage model to maiden, a great excuse to get out. Team tea bag were, of course, there. 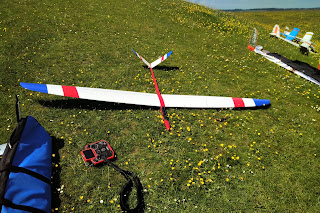 With the usual conversations going on about 'this model fly in up to 10mph then I'll get the next model from the car' I couldn't help to remember that this was the falcon that I had screaming around the crest in 40mph.

Dry, the harrier are spritely models and I've been dialling back the ailerons when in 'speed mode' to reduce the drag. It's light weight really helps it circle up in the summer thermals. I've not done much playing with reflex but having a lovely time learning.

Weekend at the nationals

Racing on Micky's is something I've not enjoyed for a long time and racing in the sunshine on Micky's feels like such a rare thing.  Combined with catching up with some old friends and life was good!  There was enough of a breeze that you were unlikely to land out but the warm sunshine generated a regular cycle of ballistic thermals and sticky sink, perhaps my first flight summed this up, a 68 run followed by such an epic thermal whilst I was going to land that my Harrier was climbing with the CROW out. 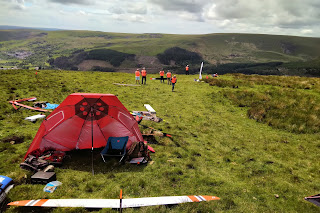 For the last year I have been loving flying my Harrier and that's meant a lot of air time.  Until you're up against the clock and other models on the same slope you're never quite sure just how quick the model is.  After Saturday's racing I feel that we have proved what we already knew- if you have the lift you will go fast, if not you won't.  Having flown the Harrier for a good number of hours I felt prepared to react to lift coming and going during a run and reacting to this.  It became clear that those other pilots flying 1 model were generally in a similar position. 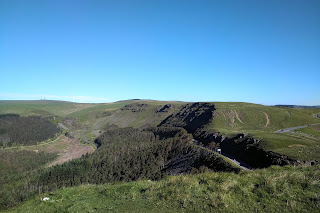 Those switching models in order to try and attract a thermal seemed to do less well.  I was really pleased with the rounds where the Harrier ended up in 2nd/3rd and 5th position but just about all the runs felt settled and straight.  The Harrier was just easy to fly.  I think my 1 cut may have cost me a top 6 place but the Harrier turned really well.

Pete Gunning was simply fastest and smoothest all weekend- you can't fault him.

The other models on show that caught my eye for some very different reasons were the Shinto- a beautiful elliptical plan form and John Philip's Impulse 2- the sheer simplicity of the planform and tail remined my of my own models and it's can't half go!

A great weekend, I can look forward to the next one confident that the Harrier can mix it with those more expensive models.