Weekend away at the Mynd

It's not often that driving round after the family fits in so well with a trip too the slope.  With Emma having a full day at Lillieshall I had the time to enjoy a sunny few hours on the Mynd.  It's been a good few years since I drove up the steep road that climbs to the top of the big old lump that is the Mynd. 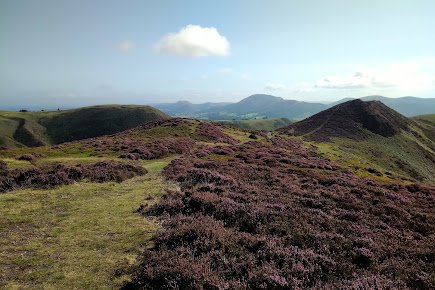 There was more wind than I expected at the top.  Not a gale but a steady 6-12mph and glorious sunshine.
I did my usual trick and carried 2 models across to the slope but I only ended up flying the Falcon.  It feels a light weight model and very responsive to lift and thermals.  When the lift did come through, some smooth flying had the Falcon scooting around very nicely and carrying the energy very very well.  I was enjoying it too much to switch to the Harrier before the wind died off.
It was great to meet up with Andy Burgoyne to see some great flying with his freestyler and excellent company.  A lovely day out and I'm looking forward to the next trip out. 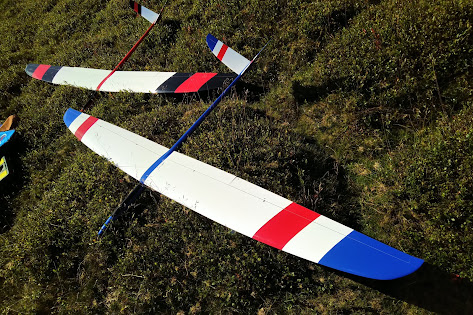 A fun weekend's flying with the Harriers.  I've not been able to make any league comps for a good few years but a 2 day comp close to home was one to make.  Day 1 was cancelled and so I had the chance to fly Beer cliffs.  A stunning place to fly with 400ft vertical cliffs and a steady breeze. But as prep for Whitesheet it wasn't the best!

Whitesheet's thermal lottery was always going to be a challenge.  The organisation from the club managed to squeeze 10 rounds in and give everyone the chance of at least 1 good flight.  Once I remembered where the bases were I was really pleased with the pace of the Harrier between the bases.  When my good air did come (round 9) she was away and screamed around the course to set the 2nd fastest time of the day.

My eventual 10th is the second time in 2 comps that the Harrier has delivered this year, after the Nationals.  Looking at the other models on show it's clear that there's more than 1 way to set up and fly each model.  The Pike Precision 2 was a good example, Mike Shelim had his set up really nicely and and when the lift came he delivered some very impressive times.

A few weeks to the Welsh open any my next comp.

Dusting off the Harrier

Between kids holidays and having so much fun flying the Falcon for he last few week's I realised that with the English open thermal lottery next week it was about time I got the Harrier going again.

Sunday was Whitesheet's open slope day and it was fantastic to see so many modellers arriving at the hill with an array of toys.  Rusty? oh yes! but its wasn't long before I was wondering why I fly anything other than the Harrier- this is possibly why I always seem to take 2 models and just fly 1 when I go flying.

I see that flightech have received their latest batch of Harriers.  It won't be long before there'll be more of these in the skys!