A christmas blow out

May be it was the mulled wine talking or my sterling duty at the in-laws yesterday but and un-expected off of 'why don't you go flying' had me away and heading for the nearest slope before you could say Rudolf. 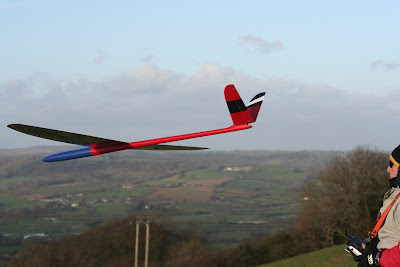 45mph winds and sunshine almost made me forget that I was ankle deep in mud but the Willow had 1kg of lead bolted in and she was away!  Necer mind F3F or any other practise, today was a day to enjoy the air and flying.  Launching without hilding your transmitter means you have to trust your model- I do! 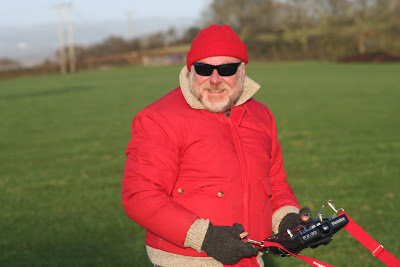 I was joined by Phil taylor and a guy dressed in red who'd done a lot of flying recently- I think we've discovered John Treble's secret!  John had a session with no damage to his Willow and looked to be really enjoying the flying. 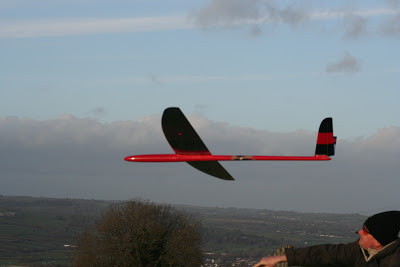 A good session's flying and great to just enjoy the energy and being out!
Posted by ian at Thursday, December 27, 2012 No comments: 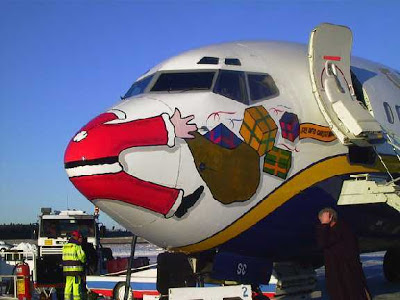 Just when I thought that willows in the top 2 places in the southern Winter league was a good performance the Bolton Lightening Frank tells me that in some timed F3F practise this weekend the His Willow stopped the clock at 33.28!

I'm not sure if that counts as an official PB but it's spured me to put up a list of Willow PBs- if You're a Willow pilot with a race PB let me know and I'll start a Willow long room of fame! 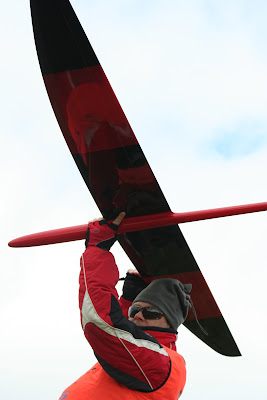 Getting up at 4:30 to travel 230miles in order to fly for less than 30 minutes is madness but on Sunday morning I did that and headed off to East Sussex.  You need good company for a trip like that and so I took the dog ad left the missus. 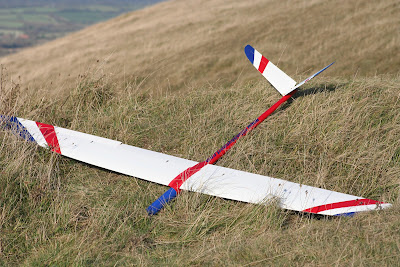 4 hours later I was arriving at the horseshoe bowl of the Long man and starting the walk along it’s edge to the furthest and highest point to set up the course and race.  Only the local were late and that gave time for the pilots bitten by the F3F bug last time at whitesheet to have a fly and get their bearings.  If the winter leagues are to offer a way into racing then the southern league is definitely doing a good job. 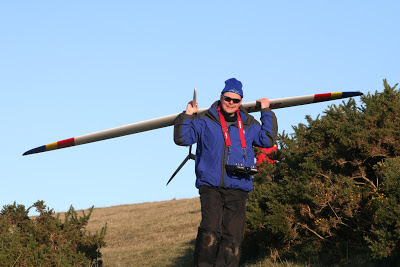 It was great to see F3F’s golden couple of Martin and Simon at the comp, showing we mortals that the air we were thinking was 46 second air was 41 but you can’t argue with the times.  It was god to see Garry Harrison fly his Rotmilan with an ultra aggressive style that seems to get him a great time or cut but rarely anything in between. 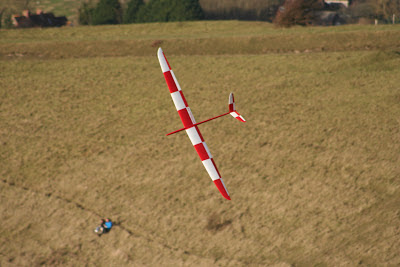 Despite having to stop because of the sun on base A 8 rounds were flown.
The Turbulent air was coped with really well by the Willow- particularly John Philips flying his, carving around the turns, particularly base B seemed to be giving the best results but with thermal variation between and during different pilots runs the knack was to know your model and trust it- about right for a Willow!
Although the golden couple took first and second place in the race I was happy  with my 5th that puts me in second place for the Sounthern winter league just behind John.  A willow 1-2 can’t be bad!
Thanks to John and the ESSA boys for a great day's racing.
Posted by ian at Monday, December 10, 2012 No comments:

Rather than sandbagging or shovelling snow this weekend it was off to Portland to meet up with Bob and enjoy a day on the cliffs.  With the wind spot on the cliff it was a day for using your lead and enjoying the guaranteed lift.  Although the set up of our Willows is very different both were howling around and as one of us flew the other often found ourselves explaining to passers by that they didn’t have engines. Bob’s Willow was the 2nd one out of the mold and although its had an eventful life it’s a fast one!


Sea lift it great for practising your racing turns, get it right and your speed builds but get it wrong and you go slow.  But I’m not going to claim I was practising for competitive racing- we were having fun.  It may be because I’ve been flying the willows for a good while now but a model that goes this fast but is this easy to fly – you can’t go wrong.
Now to go to Eastbourne next weekend or not.....
Posted by ian at Monday, December 03, 2012 1 comment: