The stormy weather of the last few weeks means that you have to be very determined to want to go out on even your local hills.  So I just couldn't help myself, Harrier and Dog both accompanying my on a very lonely hillside, the dog's reservations were made very clear to me but I couldn't help myself.

Full ballast on this Harrier is 1.3kg, bringing the total weight to nearly 4kg and after the latest hail storm passed the wind measured just under 40mph (big air and full ballast sorted).  After taking the plunge and buying a Jeti radio I was interested to find out how a delayed snapflap would work but mainly I needed some fun.  The combination of the Jeti radio and the Kingmax servos is fast and responsive on the bench.

It was wild, the Harrier covered what felt like miles of sky and handled the conditions probably better than I did, the days of control fade are well and truley over.  With all the new twiddly bits on my radio I had the chance to try putting the snapflap on a curve and even 1mm of reflex. Both had the effect of making the elevator less sensitive around the neutral point (you probably guessed that) and helped to keep things smooth as things built.

I think my new programming had a positive effect on the speed but with so much energy and variation in the air the only thing you can say for certain is that when the air was good she went like a rocket!  I'm trying not to jump to conclusions after just 1 short session, after a long winter it felt like so much more.  As clubs start to open the chance for more flying and less programming will increase. 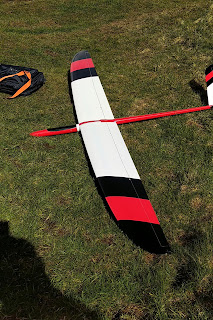 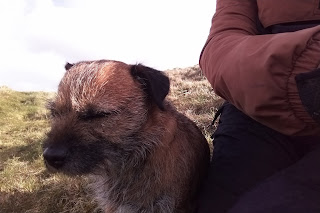